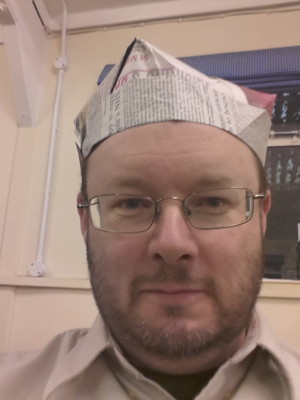 I am now a half trained cub scout leader. I spent the weekend at Bentley Copse scout centre in Surrey doing the first two days of the four day adult leader training course. When I’m done I’ll have earnt the wood badge worn by thousands of scout leaders worldwide.

The course exceeded my expectations, although those started fairly low. I was expecting two days of death by powerpoint being fed the party line, however unrealistic it may be. However what I got was a training team that understood that we were all thinking adults and that we were involved in scouting because we wanted children to have fun trying out new things in a safe environment.

As well as that the theory was well interleaved with practical activities and discussion for us both to get to know each other and to share practice.  Scouting is about helping others as much as anything else and we certainly did that. The other leaders on the course were an interesting mix of the doers of society and we all pitched in to help. This made it even more fun.

We also had fascinating sessions on communications and body language, international scouting and all the other things around the fundamentals of scouting, teaching skills and the new balanced programme.

On top of that we were well fed. It was fun, informative and I met lots of interesting people. Something I would recommend to anyone who thinks they would like to make a difference to people and the community.

The next weekend is in early March and I need to teach someone a practical skill and we’ve also got a module on running games. I am really looking forward to it.